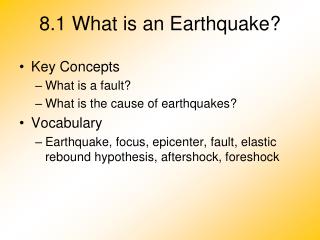 Key Concepts What is a fault? What is the cause of earthquakes? Vocabulary Earthquake, focus, epicenter, fault, elastic rebound hypothesis, aftershock, foreshock. 8.1 What is an Earthquake?. WORD PARTS. The prefix epi - is from the Greek word “ on ” or “ above ”… Earthquake - . earthquake. an earthquake (also known as a quake , tremor or temblor ) is the result of a sudden release

The Christchurch Earthquake - . the christchurch earthquake, 22 february, 2011. the injuries, our response and some

Earthquake Basics - . deadliest and largest earthquakes. did you know?. the swimming pool at the university of arizona in

Earthquake preparation - . watch the video about preparing for an earthquake in chile-

Napier Earthquake - . february 1931. what is an earthquake?. shaking and vibration at the surface of the earth resulting