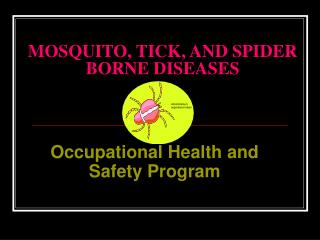 Mosquito-borne Diseases - . western equine encephalitis and st. louis encephalitis both have occurred in washington but

MOSQUITO & TICK CONTROL - Mosquito and tick is not just nuisance, they are dangerous! now you can control mosquitoes

Tick Borne Encephalitis Vaccine - Dr deb mills has a passion for medicine and travel. she is the medical director of dr