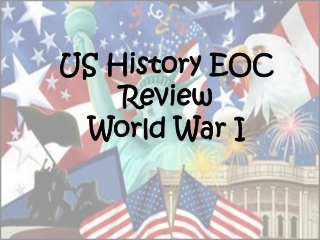 US History EOC Review World War I. What was a major reason the United States entered WW I ? Japanese occupation of Manchuria Foreign troops had landed on American soil Austro-Hungarian Empire had invaded Belgium The Zimmerman Note. 2) Where did most of WWI’s fighting take place?

America and The Vietnam War - . warm up. what is going on, who is involved and why?. origins of

Korean War and Vietnam War - . by the omniscient strivers. north vs south. korean war. key issues faced by the