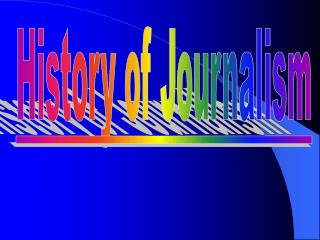 History of Journalism News reporting goes back thousands of years, perhaps to the first humans or even the first animals that could communicate to one another about such things as approaching predators.

Yellow Journalism - . noun. it is journalism that exploits, distorts, or exaggerates the news to create sensations and

Yellow Journalism - . journalism “without a soul”. material property of the arkansas department of education distance

History of American Journalism during the 1900s - . by jasmine rhinehart meda 301. who was lincoln steffens?. he was born

A very, very brief history of Euro-American print journalism and the elements of news… - . in the beginning…. there

Referans - New music should be simple, but different enough to be peculiar to the group; ... punk revolution. panic for