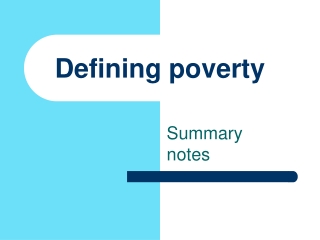 Defining poverty. Summary notes. Operationalisation. Poverty is a difficult concept to operationalise . It has a political implications - governments are supposed to deal with it. It has social implications - poverty can be a source of shame and low status for individuals.

Defining poverty - . summary notes. operationalisation. poverty is a difficult concept to operationalise . it has a

Defining the eradication of child poverty in the Child Poverty Bill - . danielle mason and natalie abbott presentation at

Poverty - . one of the major factors is of course poverty, we live in a world where the rich seem to get richer and the

Poverty - . living simply. in what way is god calling you to simplify your life? for one week, choose to live more

Poverty - . lower socioeconomic status is associated with higher risk for many diseases including cardiovascular disease,

Defining Abnormality - . how would you define normal and abnormal?. map to spec – page 58 . 1. definition of the