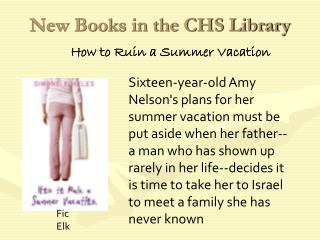 New Books in the CHS Library

New Books in the CHS Library

Library Hacks - . getting the most out of your music library patrick fulton &amp; sara nodine warre n d. allen music

BELIEF in the HOLY BOOKS - . outline. what does ‘holy book’ mean? how many holy books are there? books that we know

THIS - . is. jeeparty. your. with. hostess. mrs. fisher. hjh student librarians. “winter fun”. the catalog.

Are the Right Books in the Bible? - . robert c. newman. the books of the bible. the standard list of books in the

Economics MSc Library induction Welcome to Warwick University Library! - . what this induction will cover. how to use the

How to Automate your Small Maine Library - April 3, 2008 maine state library introductions and “snapshot” of each

Topics for Seminars &amp; Workshops in Your Library - Harness the power of library pressdisplay to explore, research