CHAPTER 7 A TOUR OF THE CELL - PowerPoint PPT Presentation 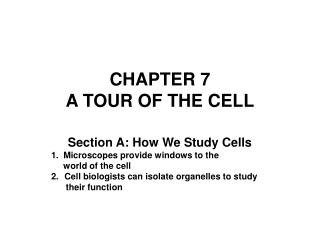 CHAPTER 7 A TOUR OF THE CELL

CHAPTER 7 A TOUR OF THE CELL. Section A: How We Study Cells 1. Microscopes provide windows to the world of the cell Cell biologists can isolate organelles to study their function. Objectives. Distinguish between prokaryotic and eukaryotic cells

CHAPTER 7 A TOUR OF THE CELL

CP BIO : Chapter 7 Cell Structure and Function - . the cell is the basic unit of life. 1. discovery of the cell. robert

Cell Organelles Chapter 7, page 174 - . modified from an original ppt of beauchemin 2006. introduction to cells. inside a

Chapter 4 Cell Structure: A Tour of the Cell - . cell: a basic unit of living matter separated from its environment by a

Cell Structure &amp; Function - . chapter 7. the discovery of the cell. without a tool to make them visible cells

Chapter 7. The Cell: Chloroplasts - . overview. chloroplasts are organelles that convert energy to forms that cells can

Chapter 6: A Tour of the Cell - . 6.1 to study cells, biologists use microscopes and the tools of biochemistry. pp. 94 -

Chapter 3: Cell Structure and Function - . the cell theory states: all organisms are composed of one or more cells. cells

Chapter 6 – Cells - . i – 2 major types of cells a. prokaryotic cells – belong to domains bacteria and archaea .

Chapter 7 Review Discovery of the Cell - . who is credited for using a microscope to look at cork and first used the word

A Tour of the Cell - . chapter 7. objectives. be familiar with the regions of the cell and the overall role of each