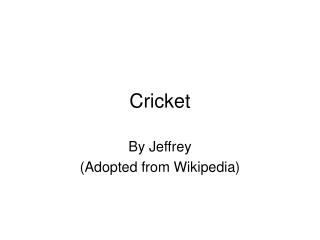 cricket - . tap the picture to find out what the spanish word for cricket bat is. golpee ligeramente el cuadro para

Cricket - . cricket is played between two teams of up to 11 players each. each team bats (takes its innings) in turn,

CRICKET - . cricket is a sport that involves a lot of skill in batting, bowling and fielding. basic rules of

Cricket - . cricket - team sports, where matches are played between two teams of eleven players. it originally comes from

Cricket - Non-stop. cricket. cricket. contents. extra’s. the basics. the equipment setting up the game how to play

Cricket - . origin of cricket. evidence suggests it was played in england in the 12th-13th century in 1744 the london

Cricket - I. what is cricket? ii. how it is played iii. how is it scored. cricket . chirag chirag. introduction. cricket,