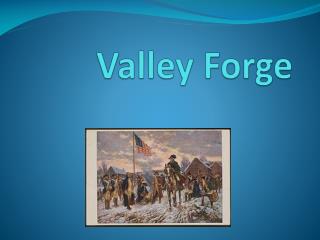 Valley Forge. Background. Located in Valley Forge, PA Around 25 miles outside of Philadelphia Arrived on December 19, 1777 Over 12,000 soldiers No battles were fought there. Housing. No housing when the soldiers arrived Building huts was the top priority 2,000 huts were built Valley Forge - . the scenario. letter from a patriot soldier.

Valley Forge - . warm up question. how would you survive a winter, in the wilderness, without shoes, shirts, blankets,

Winter At Valley Forge - . (state the significance of the following people during the winter at valley forge. also list

Report from Valley Forge - . you are a reporter that has been asked to interview a soldier about the conditions at valley

Episode #4 Winter at Valley Forge - . choosing sides. a ny colonists who are still neutral citizens must now select a