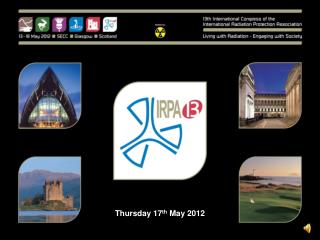 Thursday 17 th May 2012. Using New Technologies in Support of Stakeholder Engagement. IRPA13 – Refresher Course 16. Agenda for the next 55 Minutes…. Example of the use of Social Media during the Fukushima crisis Twitter Facebook Your Ideas. Thursday October 17 th - . aim : how can we be best prepared for tomorrow’s unit 2 exam on factoring polynomials ? the

Thursday, April 17 th - . pick up a slip of paper from the bin on ms. gammie’s desk. it does not matter which one you

Thursday 9 th may 2013 - . walt: understand animals by classifying them. read on to find out about scientific facts. swap

May 17 th , 2010 - Warm-up: there are two major events that have taken place over the past month on earth that are