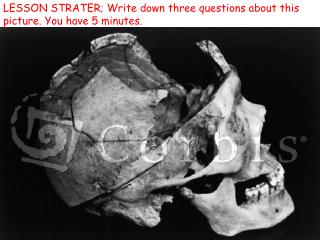 LESSON STRATER; Write down three questions about this picture. You have 5 minutes. John F. Kennedy 1960-1963. Who Killed JFK?. 22 nd November, 1963. The Assassination of Kennedy. To learn about the evidence about the assassination how this evidence is disputed Thank You for Invitng Us! - A picture is worth a thousand words! submitting pictures to gsaxcess® desired pictures

The Van Bliven Necklace - . how to solve the mystery. always read the story first. it supplies you with vital clues. read

Where do our ideas come from? - . make your own observations. take 10 minutes to observe people outside come up with 3

HOW TO WRITE CONSTRUCTED RESPONSE ANSWERS… - . …and not lose your mind!. what are constructed response questions?.

Bell Work - . can you answer this riddle? write your best guess in your notebook. a young lady looked at a picture and

Warm-Up – 9/17 – 10 minutes - . utilizing your notes and past knowledge answer the following questions: what is an