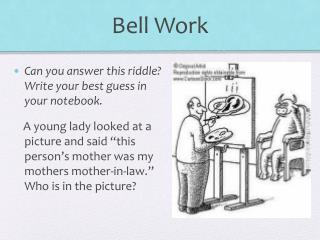 Bell Work. Can you answer this riddle? Write your best guess in your notebook. A young lady looked at a picture and said “this person’s mother was my mothers mother-in-law.” Who is in the picture?. Consider…. Are people good or bad by nature? You must choose one: good or bad