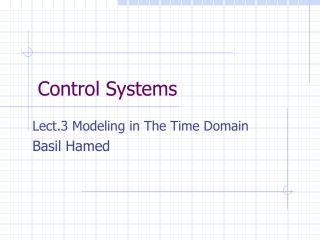 Control Systems. Lect.3 Modeling in The Time Domain Basil Hamed. Chapter Learning Outcomes. After completing this chapter, the student will be able to: • Find a mathematical model, called a state-space representation, for a linear, time invariant system (Sections 3.1-3.3)

4. Processes and Processors in Distributed Systems - . in most traditional os, each process has an address space and a