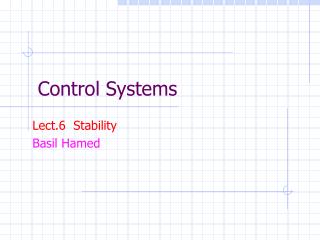 Control Systems. Lect.6 Stability Basil Hamed. Chapter 6. After completing this chapter the student will be able to : Make and interpret a basic Routh table to determine the stability of a system (Sections 6.1-6.2 ) Control Systems - As ict. control systems. objectives. have an understanding of how organizations use ict. be able