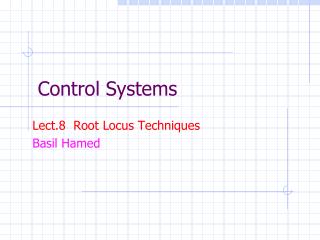 Control Systems. Lect.8 Root Locus Techniques Basil Hamed. Chapter Learning Outcomes. After completing this chapter the student will be able to:. Root Locus – What is it?. W . R. Evans developed in 1948.

PPT on Access Control Systems - Maha security solutions are specialise in ip video and cctv solutions. whether you have