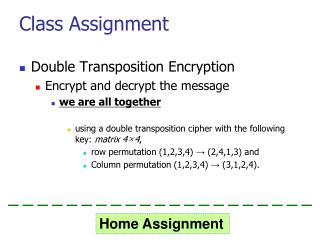 In-class Assignment - . name, major, status what do you hope to learn from this class? how do the mass media affect you?

In Class Assignment - 1. plant vacuoles are large, 90% of cell volume, which pushes the chloroplasts to the periphery of

Assignment 2: Class Notes - . please set up a piece of paper cornell style and copy down the following notes (cornell

In-Class Assignment #19 - . discussion of international news websites what did you find different across the sites? what

Assignment for Last Class - . remember questions you had about seth’s presentation choice of law in the european union

Assignment for next class - . correct data table and graph for your class/hour trendline , equation, and r 2 value

Top Class Help for Assignment Writing - Assignment Help - We at http://casestudyhelp.com/ if you want to get help in

SC100 Class 3 Homework Assignment - . 1. what did the builders of stonehenge accomplish? a. they demonstrated that some

SC100 Class 4 Homework Assignment - . 1. “eighty miles per hour toward the northeast” is an example of a.