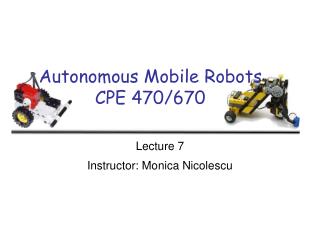 Autonomous Haulage Trucks: - . the future is now!. john a. meech university of british columbia. charles darwin. it is

PLANNING - . ivan bratko. acknowledgement: some of these slides were adapted from d. nau’s course on planning. example:

Intro to Movement of robots and introduction to kinematics of robots - . kinematics: constraints on getting around the

Mobile Marketing for YOUR Business - . turn on the true power of mobile marketing into tons of new and highly paying

3. Effectors and Actuators - . mechanisms for acting on the world degrees of freedom and mobility methods of locomotion: