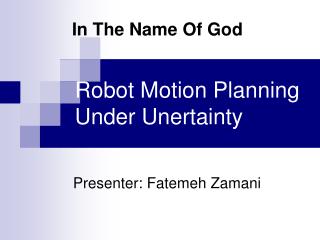 In The Name Of God. Robot Motion Planning Under Unertainty. Presenter: Fatemeh Zamani. Introduction. One of the ultimate goals of robotics research is to create easily autonomous robots.

Optimization under Uncertainty for Advanced Planning and Scheduling - . one software, many solutions. customer specific

Planning under Uncertainty Lab - . this lab asks you to develop your own algorithm for planning when the environment is

Probabilistic Roadmaps - . the complexity of the robot’s free space is overwhelming. the cost of computing an exact