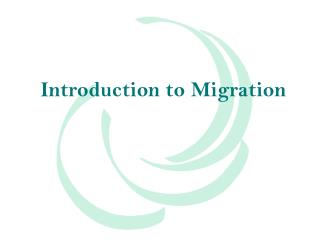 Introduction to Migration. Migration is Global. In 2011, 215 million live outside country of birth 700 million migrate within their country Demographic forces, globalization, climate change will continue this trend. Why do people migrate?. Push & Pull factors Economics Politics Migration to Australia - If you live overseas and you'd like the opportunity to live and work in australia. read here for

MIGRATION TO GERMANY - . first labor migration from turkey to germany between turkish foreign ministry and szhleswig -

Migration to GT4 - . aist has done the migration. aist has released ninf-g4 invoke remote processes via ws gram as well

Migration to Exadata - . arup nanda longtime dba and now dma. what is this session about?. various methods for migrating

Pioneer Migration to Utah - . founding of the mormon faith new york, 1830. joseph smith jr. said he had seen a vision

Savannah to Jira Migration - . lhcb computing workshop 19 th of may 2014. is it necessary to migrate?. savannah is not