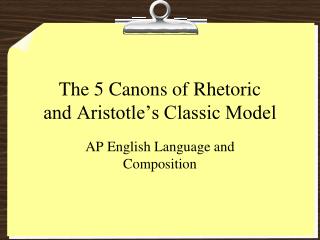 The 5 Canons of Rhetoric and Aristotle’s Classic Model The 5 Canons of Rhetoric and Aristotle’s Classic Model. AP English Language and Composition. History of Rhetoric. During the 4th century B.C., Aristotle wrote the Rhetoric in which he defined rhetoric as discovering all available means of persuasion on a topic.

The 5 Canons of Rhetoric and Aristotle’s Classic Model

AN INTRODUCTION TO ARGUMENT AND RHETORIC - . ap language &amp; composition. what is an argument?.

The Art of Rhetoric - . learning how to use the three main rhetorical styles (logos, ethos, pathos). according to

What is Rhetoric? - . definition of rhetoric. rhetoric (n) - the art of speaking or writing effectively . content = what

Rhetoric - . the art of speaking or writing effectively. aristotle. according to aristotle , a greek philosopher,

What is Rhetoric? - . the power of effective communication. rhetoric. the ability to discern the available means of

What is Rhetoric? - . the following quotes have been used to define rhetoric throughout history:. plato: “rhetoric is

RhETORIC - . “he who does not study rhetoric will be victim of it.” – found on a greek wall from 6 th century b.c.

What is Rhetoric? - . rhetoric (n) - the art of speaking or writing effectively (webster's definition). according to

Rhetoric - . rhetorical triangle, soapstone , and appeals. rhetoric. “the faculty of observing in any given case the

Rhetoric, - . the art of persuasion. “persuasion is a form of demonstration, for we are most fully persuaded by