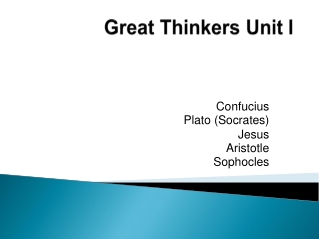 American History Unit 17 – The Great Depression - . photo courtesy of library of congress. the years after world war i

World Geography Unit 2 Thinkers - . 4 . what are some of the reasons for the location of cities? 5. what is a push

THINKERS - . “we need to think how we can solve the video problems!!!”. inquirers. “we need to go to the library

Enlightenment Thinkers - . directions. use the chart to complete the information on your enlightenment philosopher. use

Thinkers v/s Doers - . an insight required for all of us a loud thinking by dr. bala. thinkers versus doers

Unit 9 Thinkers - . underdeveloped nations are likely involved in what type of economic activity ? answer: primary what

The Enlightenment Thinkers - . fill in your chart with these facts as we go through the notes. . basics vocab . natural

If you go to the party, you’ll have a great time! - . unit 10. section a. teaching goals: 1. words and expressions in