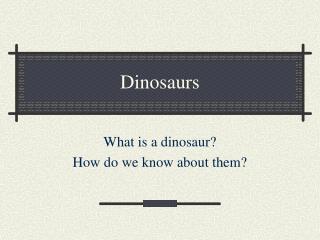 Dinosaurs. What is a dinosaur? How do we know about them?. Dinosaurs. Fossils. PETRIFIED FOSSIL The Field Museum in Chicago displays a fossil of a Tyrannosaurus rex . What are fossils?. Fossils are the petrified remains of ancient objects. Petrified – means turned to stone.

Jellyfish - . malaysia &amp; south east asia. presentation. by steve. made from jelly?. what are they?. no!. they are

Mammals Grew 1,000 Times Larger After the Demise of the Dinosaurs

Dinosaurs after the flood? - . the biggest problem with understanding dinosaurs is:. the word dinosaur. how would you

The Dinosaurs of Waterhouse Hawkins - . day 4. concept talk . how can paleontologists help us understand the past?.

Dinosaurs: Inference and evidence - . what do we really know?. how does a fossil form?. 1- death 2- rapid burial (usually

Dinosaur Habitats - . by liam j. vella. where did they live?. dinosaurs were land animals they lived at different times

Unraveling Dinosaur Bones - . overview of topics . upon death of dinosaur changes in bone composition during

The Dinosaurs of Waterhouse Hawkins Word Ladder - . fifth grade phonics unit 3 week 3. on the bottom rung of your word

Explorations of the Universe - Variations on a theme are played on top of one another, creates an aural impression of ...