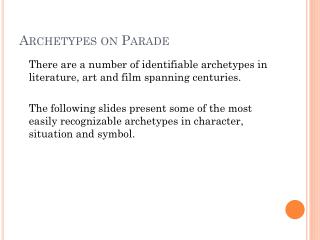 Archetypes on Parade. There are a number of identifiable archetypes in literature, art and film spanning centuries. The following slides present some of the most easily recognizable archetypes in character, situation and symbol. . Some Archetypal Characters. Hero/Heroine Sidekick/Helper Penguins on Parade - . penguins are birds that cannot fly. their bones are heavy and their flippers are thin. they love

Archetypes - . by helen todd. background. created by jung, disciple of freud structure of the psyche collective

Archetypes - What is an archetype?. an original model which other things are similarly patterned afteran image, story

Archetypes - . the history and theory behind archetypes and how they impact the study of literature. carl gustav jung.

Archetypes - . what is an archetype?. basic plot, character, image or idea that recurs in different versions of a story.

Archetypes - . archetypes. a recurring pattern existing universally and instinctively in the collective unconscious of

Archetypes - . introduction. researchers have been able to collect and compare myths, legends, and religions of cultures

Archetypes - . it is an image, story-pattern, or character type that recurs frequently and evokes strong, often

Archetypes! - . what you never knew that you already know!. archetype. an archetype is from the greek word arkhetupos

Archetypes - . the building blocks of stories. definition of archetype. archetype is a greek word meaning “original