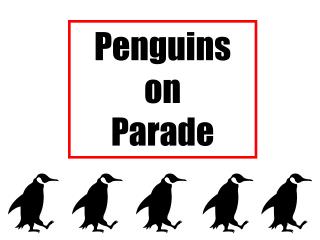 Penguins on Parade. Penguins are birds that cannot fly. Their bones are heavy and their flippers are thin. They love to eat fish, squid, and krill. Archetypes on Parade - . there are a number of identifiable archetypes in literature, art and film spanning centuries.

Penguins! - . penguins live in water half their

Penguins - Are one of the most well-known animals in the world. they are members of the bird family. they are birds

Penguins - . a review. who am i?. clue: i am one of the most numerous penguins. am i? an emperior penguin a chinstrap