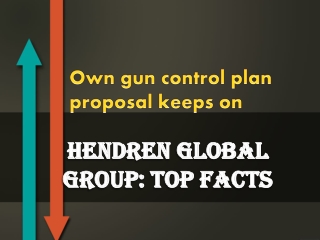 http://hendrengroup.biz/blog/2013/02/09/own-gun-control-plan-proposal-keeps-on/ WASHINGTON — House Democrats will unveil 15 proposals for curbing gun violence that resemble President Barack Obama’s plan and will include a call for banning assault weapons, people familiar with the package said Wednesday. The Democrats’ recommendations will also include barring high-capacity magazines carrying more than 10 rounds of ammunition, requiring background checks for all gun sales and prohibiting gun trafficking, all of which Obama proposed last month. The proposals, to be released Thursday by top House Democrats, were described by people who requested anonymity because they were not authorized to discuss the plan publicly. They represent the initial House Democratic response to the horrific Dec. 14 shooting of 20 first-graders and six adults at the Sandy Hook Elementary School in Newtown, Conn. Even so, the Democrats’ proposals are unlikely to go anywhere quickly in the Republican-controlled House. A spokesman for House Speaker John Boehner, R-Ohio, has said the House will wait to see what the Democratic-led Senate does. Obama’s gun control proposals have been opposed by the National Rifle Association, which is a potent lobbying force on Capitol Hill. In addition, some Democrats — including many from rural or conservative areas — have been reluctant to endorse the president’s plan. Gun Control - . should the u.s. government ban the possession of handguns for normal citizens?. public opinion is mixed!.

Gun Control - Want to learn more about gun control? read on, and get in touch with writing experts whenever you need help

Gun Control - . by: jennifer alberto &amp; diana colon. gun issues. mental and drug alcohol abuse have been the cause

Gun Control - . there are 192 million privately owned firearms in the united states 65 million are handguns the number of

Gun control - . by lauren lindsay. guns should be locked up. “in florida, two young boys found a shotgun under a bed in

Gun control - . by: julia mussoline. gun control is important to keep our country safe, how ever american do have the

Gun Control - A well regulated militia, being necessary to the security of a free state, the right of the people to keep

Gun Control!!!!!! - . i think everyone has the right tot own a gun. people have so many rights. do you no you have the

Gun Control - . by nacho. why the government wants to ban guns. to minimize the risk of more shootings such as. sandy

Gun Control - . by: erik goetsch. gun control is what the government tried to pass to keep mass murders from happening.