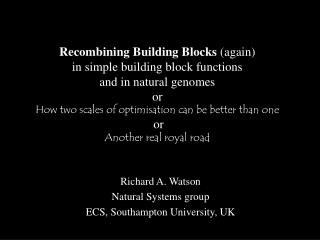 Recombining Building Blocks (again) in simple building block functions and in natural genomes or How two scales of optimisation can be better than one or Another real royal road. Richard A. Watson Natural Systems group ECS, Southampton University, UK. Overview.

APES year in review - . 2007, the year everyone gets a 5!. chapter 1: introduction. understand how natural world works