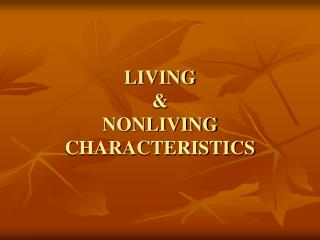 LIVING & NONLIVING CHARACTERISTICS. Characteristics of Living Things. 1. Made of cells-- microscope invention. …or just one cell. 2. Reproduce - The way organisms make new ones. Living fishes - . the living fishes (not a monophyletic group) include: the jawless fishes (e.g. lampeys), cartilaginous

Ecology - . i. vocabulary:. ecology - the scientific study of interaction between organism and their environments. i.

Unit 1 Cells and Cell Processes - . 1.1 characteristics of living organisms. what you need to be able to do: list and

Antiviral Drugs - . general characteristics of viruses. depending on one's viewpoint, viruses may be regarded as

Antiviral Drugs - . general characteristics of viruses. depending on one's viewpoint, viruses may be regarded as

MEMBRANE STRUCTURE AND TRAFFIC - . membrane models. general features of the plasma membrane a boundary that separates

Life Science - . chapter 2 characteristics of life. bellwork. think and write about the parts of the test you had

Soil - . characteristics, degradation, and conservation. what is soil?. soil is derived from rock, and contains a large