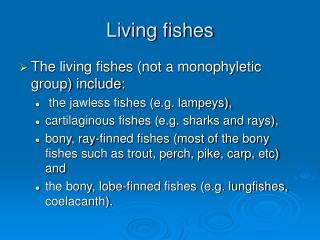 Living fishes. The living fishes (not a monophyletic group) include: the jawless fishes (e.g. lampeys), cartilaginous fishes (e.g. sharks and rays), bony, ray-finned fishes (most of the bony fishes such as trout, perch, pike, carp, etc) and

FISHES - . phylum chordata. contains all fishes, amphibians, reptiles, birds, and mammals all chordates have a

Fishes - . diversity. fishes are dated back to over 480 million years fish evolved in fresh water now fish live in all

Fishes - . by : jessica martinez &amp; gabriela perez. what is a fish?. aquatic vertebrates characterized by fins,

Fishes - . what is a fish?. aquatic vertebrates that have paired fins, scales, and gills. of course there are exceptions

Fishes - . chapter 24. i. diversity. 26,000 living species—more species than all other vertebrate groups combined

Fishes - . chapter 24. what is a fish?. “fish” has many usages extending beyond what are actually considered

Fishes - . moser and hanson. where exactly are they?. fish live in either fresh or salt water (some in anemones),

Marine Fishes - . pelagic organisms that can actively swim (against a current) are known as nekton. nekton include some

Marine Fishes - . read chapter 9 pages 154- 178. chordates. all chordates have (at least during some period of their