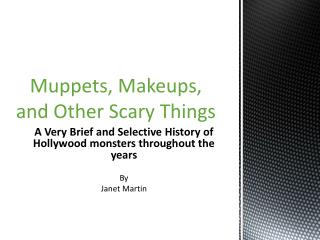 Muppets, Makeups, and Other Scary Things Muppets, Makeups, and Other Scary Things. A Very Brief and Selective History of Hollywood monsters throughout the years By Janet Martin.

Muppets, Makeups, and Other Scary Things

2.2 Adaptations for Gas Exchange - . material needs. what sort of things do living things need to obtain from the