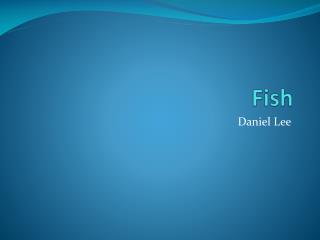 Fish. Daniel Lee. What is a fish?. Fishes are limbless aquatic vertebrates. Most fish are cold-blooded and have paired fins, scales, and gills. Phylum: Chordata Pharyngeal slits(gills) Dorsal nerve cord - bundle of nerve fibers that run down the back.

Fish Online Delhi - When you shop for your fish products from fish online delhi services, you totally avoid the crowd.

What are Fish? - . read each slide look at each picture. answer each question. fish are slim animals that live in the

Fish - . by jackson, max , grace and aralynn. characteristics of fish. fish have scales fish have gills to help them

FISH - . fish. learning more about them. kelly cope. questions. questions. what is the fastest fish and how fast can it

CHAPTER 14 FISH AND SHELLFISH - . fish and shellfish. fish are aquatic vertebrates with fins for swimming and gills for

FISH! - . catch the energy!. release the potential!. a fish -y parable!. an invented story about finding the deep source

What is a Fish? - . poikilothermic – body temperature is identical to surrounding water chordates – have

The Fish Elizabeth Bishop - . the poems describes the relationship formed between bishop and the fish. bishop vividly

FISH FORM AND FUNCTION - . by jennifer granneman. what is a fish? why are some fish colorful and others aren’t? why do

Fish - . what are fish?. aquatic vertebrates most have paired fins scales gills wide range of characteristics belong to

FISH - . phylum chordata. all chordates have for all or part of their lives: a. a notochord - flexible rod shaped support