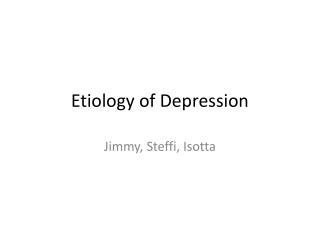 Major Depressive Disorder - . in a national survey, 31% of american collegians agreed when asked if in the past year they

Depression - . epidemiology and burden. depression is a highly prevalent condition about one in a seven will experience

Social and Cultural factors in depression - . by dominic and tobi. etiology. the causes and origins of a disease or

Major Depressive Disorder - . by: alicia diaz. what is major depressive

Causes of the Depression - . 21.1. objectives. discuss the weaknesses in the economy of the 1920s. explain how the stock

Etiology Of Depression Socio - cultural Factors - . by greig illingworth and annie reid . what does etiology mean?.

Causes of the Depression - . under consumption. stock market speculation. overproduction. the great depression. the dust