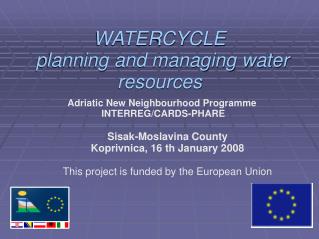 Water Resources - Water is essential to life on earth. humans can live for more than month without food, but we can live

6. Water Resources Planning and Water Law - . rationale of planning water resources: will become insufficient in both

Chapter 21: Water Supply, Use and Management - . water. to understand water, we must understand its characteristics, and

Ch. 13: Water Resources - . by chris mccord and weston takata. how can we deal with our water problems?. will we have

The suitable utilization and Development of the water resources - . professor and doctor ngo dinh tuan.

Water Resources - . will we have enough usable water?. we live on a water planet, with a precious layer of water-most of

Water Resources - . chapter 11 section 1. what do we use water for?. where does our water come from?. did you know?.

Water Demand Management in the City of the Future - . water supply and sustainable urban water management. the urban

Water Management and Conservation in the Landscape (outline) - . the water cycle stormwater: runoff, conveyance and

Farm Estate Planning Strategies - . one of the challenges of planning is to make people aware that they need to take