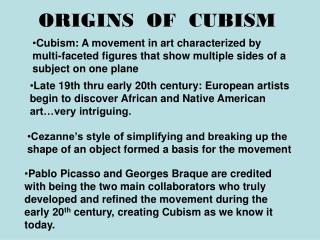 ORIGINS OF CUBISM Cubism: A movement in art characterized by multi-faceted figures that show multiple sides of a subject on one plane Late 19th thru early 20th century: European artists begin to discover African and Native American art…very intriguing.

Cubism - . by abdulrahman bin fahad bin saud althani. what is cubism?. it’s a style of painting it’s painting from

The Origins of Editing Styles and Techniques - . com 320—history of the moving image. i. the beginnings of classical

Modernism - . english 11 honors. definition of modernism:. is an opening up of the world in all of its forms -

CUBISM - . i paint forms as i think them not as i see them. pablo picasso, les demoiselles d’avignon , 1907. cubism.

Cubism - . maryam hamouda 7b. what is cubism?. in cubist artwork, objects are broken up and reassembled in an abstract

Cubism - . origin. the invention of cubism was a joint effort between pablo picasso and g eorges braque, then residents

THE VISUAL LANGUAGE OF ART – HOW ART COMMUNICATES TO US (Art and its Appearance) - . the three languages of art. henry

Cubism - . 1908-1914. cubism. cubists broke objects into a multitude of pieces that were not actually cubes. the name

Modern Art - . click an image to learn more about that style of painting. impressionism. this painting started the

Cubism - L/o: show understanding of the cubist style of art and how to recreate it through photography. all must (e):

CUBISM - . background info. cubism is one of the most influential art styles of the early 20 th century. it was created