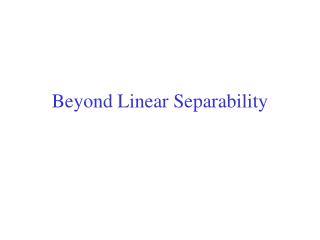 Beyond Linear Separability . Limitations of Perceptron. Only linear separations Only converges for linearly separable data One Solution (SVM’s) Map data into a feature space where they are linearly separable. Another solution is to use multiple interconnected perceptrons. .

Multi-Categorical Output Tasks - . there are other kinds of rankings; e.g., example ranking. this is, conceptually, more

Cognitive Computing 2012 - . the computer and the mind 4. connectionism professor mark bishop. the representational

An Intro to Nerual Networks - . thanks: professors frank hoffmann and jiawei han, and russell and norvig. biological

Beyond one particle in one dimension - . treating many particles. particles moving in two, three- and more (!)

Uncertainty and Significant Digits - . 2.4-2.5. how long is the nail?. uncertainty. every measurement has some degree of