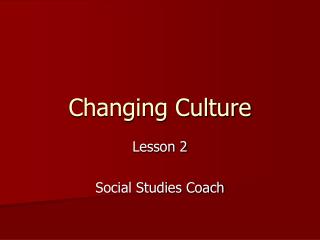 Changing the culture - . because girls deserve a better world. mission : to create opportunities, develop programs and

CHANGING THE CULTURE - . notre dame prep hockey. what ndp hockey was. lack of pride lack of control lack of commitment or

Changing Culture through Protocols - . session 6, november 2013 nti. learning target. i can support the development of a

Changing Culture through Protocols - . session 6, november 2013 nti. learning target. i can support the development of

Changing Institutional Culture (Group 6 ) - . technology is really an adjunct rather than the most important part of the

Ch. 20-3 Changing Culture - . miranda manley. culture - the way of life of a group of people as simila te - becoming part

Changing the culture at Finley - . in the past 5 years, finley administration has taken a variety of steps and