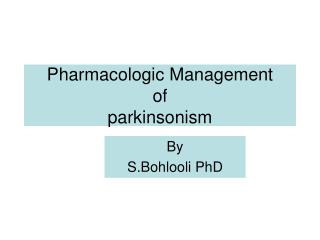 Pharmacologic Management of parkinsonism. By S.Bohlooli PhD. Parkinson Disease. Neurological disease affecting over four million patients worldwide While it can affect individuals at any age, it is most common in the elderly. Project Risk Management - . learning objectives. understand what risk is and the importance of good project risk

Introduction to Pharmacology in Nursing - . donna penn rn msn cne . nurses need to have knowledge about the actions and

H YPERTENSION I N T HE I NPATIENT S ETTING Mechanisms and Pharmacologic Management - . dedicated to the memory of l eon i

INTRODUCTION TO GENERAL MANAGEMENT - . objectives of this chapter. to provide an overview of the role of management in

Power Management 101 By Jeff Dunker 2-11-06 - . power management is energy management over time. unless the power source

Earnings Management - . what is earnings management? it is the choice by a manager of accounting policies or real actions

Memory Management - . memory management is the managing of the pool of available memory in a computer system, allocating