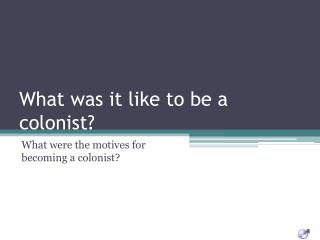 What was it like to be a colonist?. What were the motives for becoming a colonist?. Baby Colonists?. Clout – diaper made of linen, pinned with straight pins or tied with fabric tape Back fastened gown worn by girls until 12 or 14 and boys until 4 or 7 Greece and Geography Warm-up - . definition: settlement- a small community or village shelter- a place that provides

Terms and People - . george washington – virginia colonist who led troops against the french during the seven years ’

Proclamation of 1763 - . made in october 1763 by king george iii of g reat britain it was created to avoid warfare with

Revolutions - . world history . loose control hindered the colonies in britain when the profit started to be made, new

Chapter 2 New World Experiments - . what defines a colonist of the new world. escaping religious persecution search for a

Notes on the Colonies… - . miss springborn team 6 social studies. why be a colonist?. what would make you want to leave

The Boston Tea Party - . all because of taxation without representation. these are facts you should know about the boston

Road to Revolution - . navigation acts 1651. law passed by britain that said the colonist could only trade with the

Jamestown 1607 - . stem engineering project. essential question. how would you improve upon your ability to survive and

Wednesday, Oct. 3 - . get out your spiral and put your binder on the floor update your table of contents date title