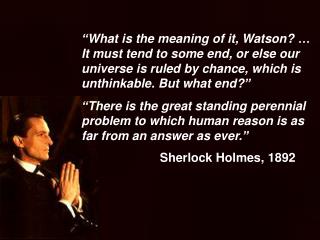 “What is the meaning of it, Watson? … It must tend to some end, or else our universe is ruled by chance, which is unthinkable. But what end?” “There is the great standing perennial problem to which human reason is as far from an answer as ever.”. Sherlock Holmes, 1892.

Sherlock and Abaqus - . october 16, 2014. who is dfr solutions?. the industry leader in quality-reliability-durability of MLA Citation 101 - . the two parts of mla documentation work together. in-text citations let readers know that you have

Sherlock holmes in to modern - . by: a.contreras , j.sifon v.macchiavello. jonathan small agustin contreras. thanks for

How to Grow your Business using Facebook - Are you struggling to figure out the facebook algorithm? here are some