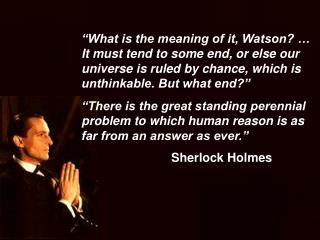 “What is the meaning of it, Watson? … It must tend to some end, or else our universe is ruled by chance, which is unthinkable. But what end?” “There is the great standing perennial problem to which human reason is as far from an answer as ever.”. Sherlock Holmes.

Sherlock holmes in to modern - . by: a.contreras , j.sifon v.macchiavello. jonathan small agustin contreras. thanks for

Sherlock Holmes - . the blue diamond reading : elementary regina jirankova. 1. who was sherlock holmes ? 2. where did he

Sherlock HOLMES - . visual features. job. sherlock thinks of himself as the world’s first consulting anything that

Sherlock Holmes - . “once you eliminate the impossible, whatever remains, no matter how improbable, must be the

Sherlock Holmes Genre Project - . thomas balcerak. what is it? the first case he is solving is about him trying to find