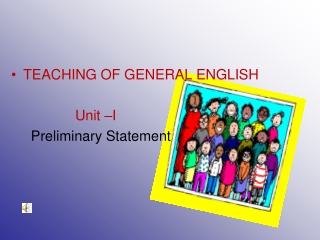 TEACHING OF GENERAL ENGLISH Unit –I Preliminary Statement. Language is a divine gift of articulate speech through which a social group co-operates It is a system of arbitrary vocal symbols Range of variations in the language definitions * general * formal features.

Phonology - . rebecca bergey tred 256. what is the difference? share your ideas with a partner. phonetics. phonology. the

Interlanguage phonology: - Phonological description of what constitute ‘foreign accents’ have been developed.

Phonetics and Phonology - . lecture 2. production of

The Linguistics of Second Language Acquisition - . essential questions. how have theorists defined languages and the

The Sound Patterns of Language: Phonology - . chapter 5 ms. abrar a. mujaddidi. introduction. in the previous chapter, we

Phonology II - . simple rules and metrical phonology. plan . in the last class, we saw how the phonology of a language

II. PHONOLOGY - . e. ii. phonology 1. the phonic medium of language the linguist is not interested in all sounds, but in