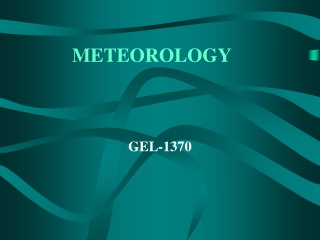 METEOROLOGY. GEL-1370. Chapter Six. Air Pressure and Wind. Goal for this Chapter. We are going to learn answers to the following questions: How and Why Atmospheric Pressure Varies? What forces influence atmospheric motions at aloft and surface?

METEOROLOGY - . gel-1370. chapter four. humidity, condensation &amp; clouds. goal for this chapter. we are going to

Meteorology - . weather – short term variations in atmospheric conditions. what causes weather?. the main cause of all

Meteorology - . the study of atmosphere and its processes. weather vs. climate. weather is the day-to-day atmospheric

Meteorology - . “climate is what you expect. weather is what you get.” -mark twain. air masses . masses of air are

Meteorology - . start. why do we have such a wide variety of weather here in the great plains?. menu. menu.

Meteorology - . chapter 12. the worst weather ever recorded in the united states took place here at the weather station