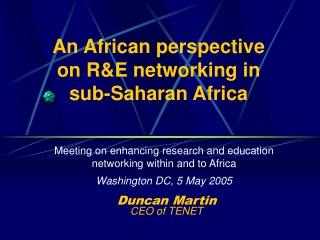 An African perspective on R&E networking in s ub-Saharan Africa. Meeting on e nhancing r esearch and e ducation n etworking within and to Africa Washington DC, 5 May 2005. Duncan Martin CEO of TENET. What’s meant by “Research and Education Networking”?. In the developed world:

MAURITIUS AS A GATEWAY FOR AFRICA Gary Gowrea - . what people have to say about africa?. tony blair once described africa

STATUTORY MARRIAGE IN PLACES OF WORSHIP - . an interactive stakeholders’ forum at the federal marriage registry, ikoyi