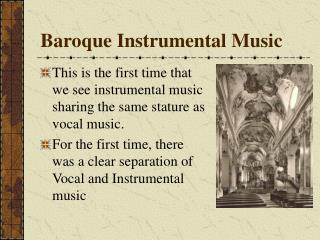 Instrumental Variables - . general use. for getting a consistent estimate of β in y=x β + ε when x is correlated with

Instrumental Analysis - . instrumental analysis. the course is designed to introduce the student to modern methods of

Baroque Instrumental Music - . this is the first time that we see instrumental music sharing the same stature as vocal

The Baroque Concerto - . origins of the term, “concerto”. “concerto” probably came from the latin word

Periods of Classical Music - . classical music is art music rooted in the traditions of western music. . baroque and