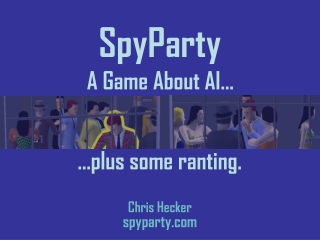 SpyParty. A Game About AI…. …plus some ranting. Chris Hecker spyparty.com. What is SpyParty?. Less of this. ...more of this. demo. SpyParty Aesthetic Goals. perception vs. deception & performance attention as a resource consequential decisions with partial information Chris - . my brother. what he does for a living. farming helicopter pilot and the last one he is a hunter . about chris

Chris - Golden tree jewellers is an authorized dealer of the biggest luxury brands in engagement ring and watches. we

Chris Hadfield - . introduction. topics that will be discussed: biography - education background, family, about him, ect.

Chris Brown - . playing hockey. h ockey is fun and fast. i like the when i score a goal. i like watching the fights.