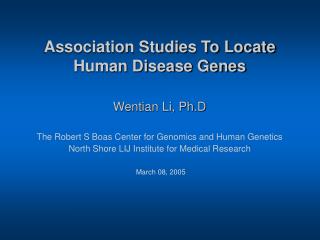 Genes and Disease - . genes and disease. genes transmit inherited traits (including mutations that cause disease) from

Lectures 30 and 31 “Identifying human disease genes” - If you are interested in studying a human disease, how do you

Bellringer: Human Genes - . have you ever wondered about your genes? if you could investigate any part of your own