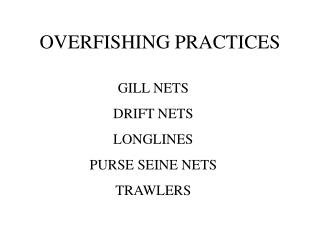 OVERFISHING PRACTICES. GILL NETS DRIFT NETS LONGLINES PURSE SEINE NETS TRAWLERS. BY-CATCH – ALL THE ANIMALS CAUGHT IN NETS OR ON LINES WHICH ARE UNINTENTIONAL AND ARE USUALLY DEAD AND THROWN OVERBOARD.

Human Impact On Ecosystems - . humans &amp; ecosystems. humans depend on ecosystems for: food habitat oxygen and

Overfishing - . group #: (presenters names). why is overfishing a problem?. no time for recovery fish populations

OVERFISHING . . . . - Overfishing. the practice of commercial and non-commercial fishing which depletes a fishery by

OVERFISHING OYSTERS IN THE CHESPEAKE BAY - . aaron natoli carleton 4/20/14. what is overfishing. overfishing is when

Overfishing: The Effects - . by: aman , cosimo , phil. what is overfishing ?. taking more fish out of the habit that can

Food and Agriculture - . land use. 11% of the earth’s land is used in agricultural production less land cultivated in

The Seafood Industry’s Affect on the World’s Oceans - . the seafood industry. over one billion people rely on fish as