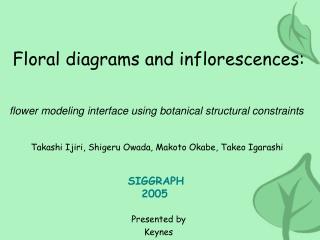 Want to give a surprise to your special person? Then contact Oleander Floral Design. - If you are searching excellent and

How to Draw Bohr Diagrams - . bohr ’ s model of the atom. octet rule – atoms are stable when there are eight

Data Modeling with ER Diagrams - . what is an entity-relationship model? how is an e-r model represented as an e-r

Diagrams - . one way scientists communicate is through pictures - diagrams. leonardo da vinci is famous for his

Inflorescences - . spring 2013. what is an inflorescence?. simpson = an aggregate of one or more flowers, the boundaries

Flower Inflorescences - . solitary and inflorescence flowers. solitary : where only one flower is on the end of the stem

WELCOME! - . university of newcastle, australia 13 th – 14 th november 2017. this land. we acknowledge and respect the