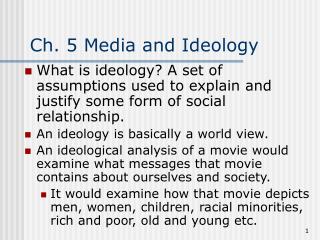 Ch. 5 Media and Ideology. What is ideology? A set of assumptions used to explain and justify some form of social relationship. An ideology is basically a world view. An ideological analysis of a movie would examine what messages that movie contains about ourselves and society.

Mass Media and Ideology - . ‘ideology’starter:. ‘how we as individuals understand the world in which we live. this

Ideology and framing - . ideology. though ideology has many definitions and is applied in many ways, perhaps the best way

Ideology and War - . how was wwii an ideological conflict?. ideology ī-dē-ä-lə-jē (noun): 1 : visionary

Ideology and Hegemony - Marx &amp; engels ideology as distortion caused by the mode of production (economic

Ideology and Philosophy - . plato’s cave. allegory of the cave oppression force persuasion. what is ideology?.

Ideology and science - . learning objectives. know the difference between open and closed systems. understand and be able