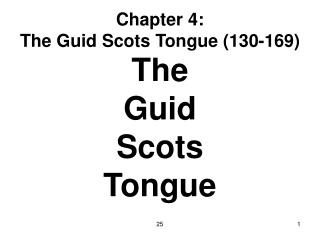 Scots at War - . creating an army. problem. the scale of world war one posed a massive challenge to the relatively small

Scots - . presentation by saskia kneubühl, david bichsel and florian berger. content. “adress to a haggis“ and

Scottish and English Reformations: John Knox &amp; the English Royals - . “from the reformation to the

Tongue - . the tongue is fleshy, movable, muscular organ, attached in most vertebrates to the floor of the mouth, that is

mary queen of scots - . mary stuart was born at linlithgow palace on 7th december 1542, the daughter of james v of

Elizabeth and Mary Queen of Scots - . why would elizabeth have someone executed?. (m) identify key features about the

FROM TASTING TO DIGESTING SENSE ORGAN – “ TONGUE ” - . tongue and its taste buds. what are human sense organs ?. a