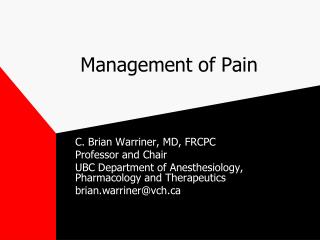 MANAGEMENT OF PAIN - . what is pain? how can pain be treated? cycle-oxygenase inhibitors opioids. “ opioid

Pain Management and Types of Pain - Mainly there are two types of pain, chronic pain, and acute pain. it could affect the

Pain Management - . paul rozynes, m.d. medical director vitas broward. pain—definition is based upon our own

PAIN MANAGEMENT - . analgesics for pain. pain is commonly one of the reasons on why patient always seek medical